October 26, 2013  •  Leave a Comment
I probably should have started this blog the day I found out I was pregnant. I probably should have done a lot of things in my past and was just too lazy or distracted to do so. Mainly, I am doing this so my daughter has something to reference in the future. Who knows if she will even want to read this. If my mom was the type of woman to keep diaries, I would want to read them. So I hope my kid is a little like me. Narcissistic? Maybe.
I'll start from the beginning. This is the boring mushy stuff. On November 10, 2007 I went on my first official date with my now husband. We met at a community theatre, doing a production of Del Shore's "Daddy's Dyin' Who's Got The Will?". I was Evalita and he was Harmony. These characters were engaged in the show. 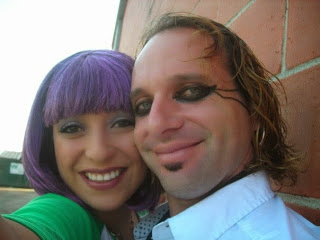 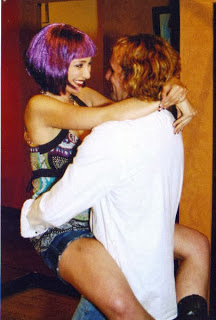 He was extremely persistent in asking me out. For the entire run of the show, he would ask me and I would say no. I am not a showmancer. You just don't dip your wick in the company ink. I agreed to dinner one night because our director had suggested we get together and come up with song ideas, just for character development and fun. He thinks it was a date. I think it was a free dinner at the Outback Steakhouse. I finally agreed to a real date on the last night of the run. We still had a Sunday matinee to get through, and he guilted me by saying, "After tomorrow, you never have to see me again." Alas, I relented. I am so happy I did. We had an amazing evening and ended up at a castmate's apartment and watched a horrible movie called Phantom of Paradise. I honestly couldn't remember the name and just had to ask him. All I can remember is lots of bling and a little man yelling "WINSLOW!". After that night, we were inseparable.
Fast forward to December 10, 2007.  We had closed "Daddy's Dyin'" and opened "A Christmas Carol". I was the 3 ghosts and he was Jacob Marley. On this evening we had my parents, his parents, his 19 year old daughter, her mom and a few friends in the audience. During the curtain call he kept me on the stage by saying he was having issues with his chains. Before I knew it, he was down on one knee and saying all sorts of pretty things to me; including THE QUESTION! 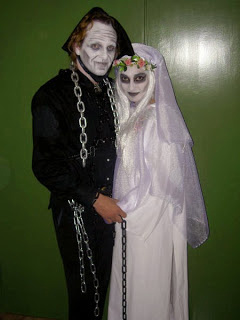 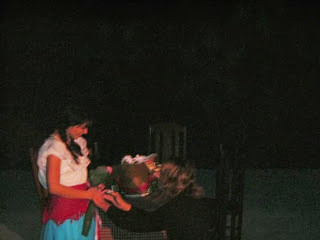 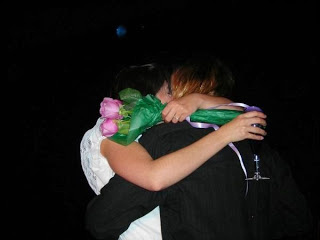 Yep, it was love. It was fast, it was whirlwind and it was real.
Fast forward to our first holidays together. We made it through without an issue. It was amazing. I loved his parents and he loved mine. It's like we all knew that this was just right. One day, he noticed that I was late. It was February 2008. We decided that I should take the test. I remember peeing on a stick, going downstairs and downing a bottle of beer. After 3 minutes, I went back upstairs. I came down in utter shock. Told him the news, threw up my beer and started crying. We were going to have a baby. It was terrifying. I was 28, he was 38 and we were absolutely not ready. My brother-in-law got him a job in the oilfield. This meant we would have to move. The prospects were getting better and we were getting so excited. A few days before our move, I miscarried. The day before our move, I had to have a D & C performed. We were both devastated, but life goes on, and so did we. This new life together wasn't going to be easy but we were ready to embrace it. 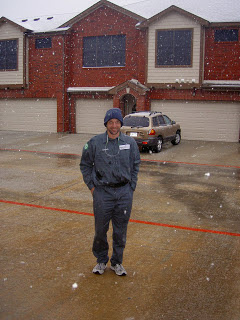 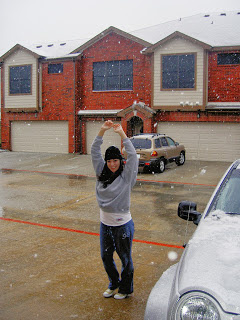 We got SNOW in our new home!
So over the next couple of years we got to know each other better. We had our share of ups and downs. We stayed together through yet another miscarriage and a couple of layoffs. In September of 2009 we decided to actually get married. We yet again found out we were expecting. It was the 3rd time. We were sure, the 3rd time is the charm.  We just got our pretty license and 30 days to get married. As soon as we got in the car, the phone rang. It was my OB. The tests came back and my levels were dropping, yet again. Just another heartbreak on another huge day in our lives. Needless to say, we spent the next few weeks in a daze and both of us forgot about our marriage license. About a week before it expired, I found it among some papers. We never planned an actual wedding, we had always planned on doing it in the courthouse. But we did want our family and friends there. Since we had run out of time, we weren't able to invite anyone. We called our parents in Houston and let them know that we were on our way down there to get married. On the way down we called a judge and she let us know that she does weddings in a local park and she could fit us in.
October 15, 2009
We tied the knot. 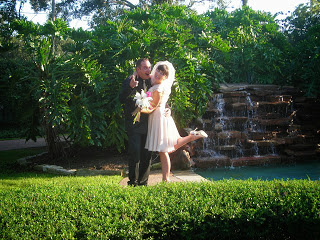 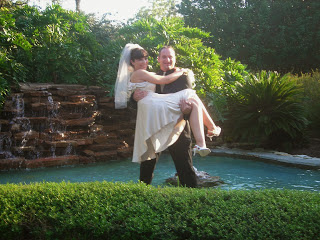 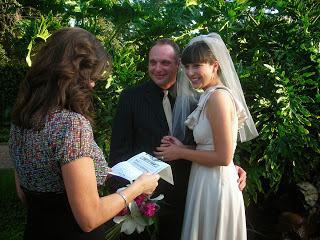 Over the next few years, we tried really hard to start our family. We did everything short of IVF. In 2012 we went through a few rounds of IUI. We were successful once but again, we lost the baby. My hubby and I decided to take charge of our lives and we decided to get fit. Both of us dropped 40 lbs and became gym rats. We ran 5K's and he has since done a 10K and on 10/27/2013 will run his first half marathon. 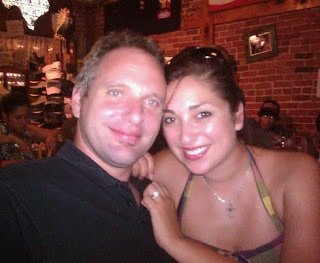 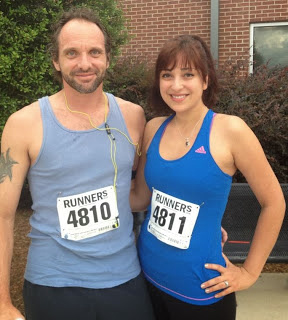 Then we discovered that we too can be healthy!
So now we are ready to make the world our bitch! Hubs got a new job and we had no insurance for 3 months. This meant we could no longer go through with fertility treatments. We couldn't afford to risk anything going wrong and not having the means to pay for it. So we put our plans on hold for 3 months. During this time, our doctor decided to switch practices, so we decided to switch doctors. We found a new doc and made and appointment for the day our new insurance kicked in. Our appointment was supposed to be June 3, 2013. That morning we got a call from his nurse saying he had to reschedule for Saturday, the 8th because he was stuck out of town. We agreed, mostly because we weren't looking forward to having to pay $400 for a new patient consultation fee. The week went by really fast. That Friday, my hubs suggested I take a test. I said I would do it in the morning. That morning I woke up early and tested. I PASSED! I immediately called the new fertility doc to cancel my appointment and he strongly urged me to come in because of my history. He was determined to help me keep this baby. My hubs and I fought over the $400. He thought it was a waste of money, when we could just got to my my regular OB. I told him that this guy was a specialist and knew a hell of a lot more than my regular OB. I was going with or without him. He relented and off we went. It turns out that insurance covered us after all, because of my chronic miscarriages and this was no longer a fertility issue but a keeping the baby growing issue. We ended up saving that $400 consultation fee and our baby. The latter was so much harder than I thought, but absolutely worth it. 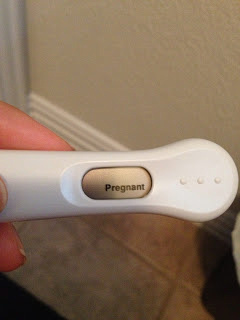